As mentioned in my post, I found a quilt pattern on the web by Rebecca McCreary called Y-Not Tumbling Blocks (which has since, been taken off the web).  She developed a cutting technique that allows you to piece tumbling blocks without Y-seams.  I took that technique and made a small sample to see how I liked using it.  There are a couple of differences between what I made and how she planned and made her quilt.

1.  I wanted my blocks to stand up straight. So when I followed her pattern, that made the dark color end up on top.  She preferred her dark to be on a side, therefore turned her quilt blocks to accomplish that. The result is her blocks slant in a downward angle. I didn’t catch that at first. This made me realize that if I preferred the straight blocks and wanted the top to be light or medium, I would need to sew my strip sets together in a different order. 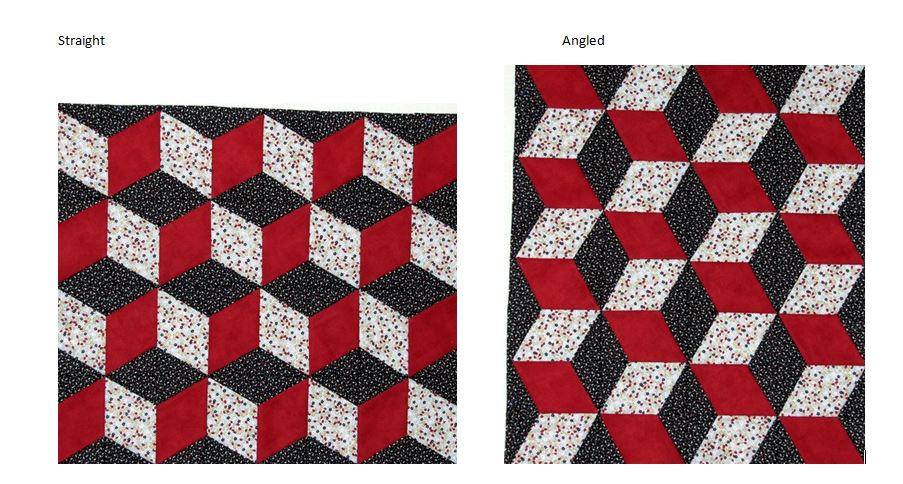 2.  I did not make large strip sets as in her pattern since I was testing this out.  Because of the 60 degree angle you will be sub-cutting from the strip sets, she staggered the edges when sewing her strip sets together.  I did not do that for my test but  I can see the logic to staggering the edges when you make larger sets to avoid too much waste.  I made my two strips sets as follows:

To achieve blocks with a light top, you need to sew a light, dark, light set, then a light, medium, light set 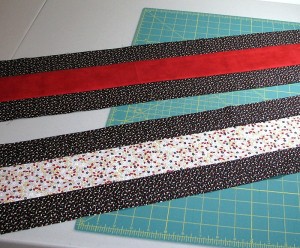 Cut the light strip as follows:

Line the 60 degree line on your rotary cutting ruler with the bottom of your strip with the ruler leaning to the left: 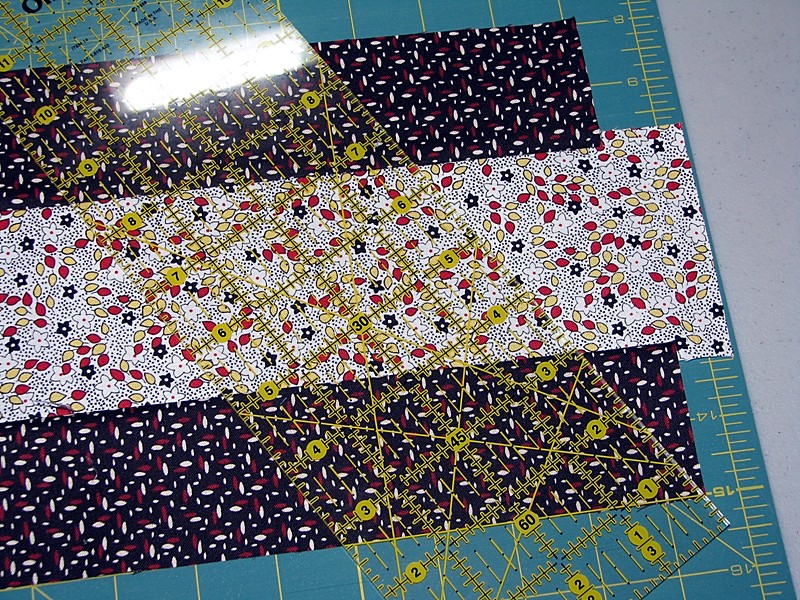 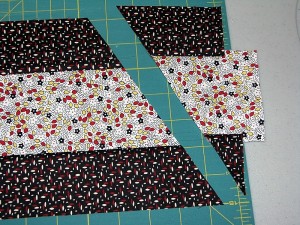 After making this first cut, flip your strip so that the cut edge is now on the left. 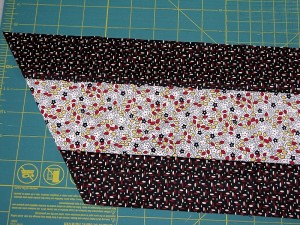 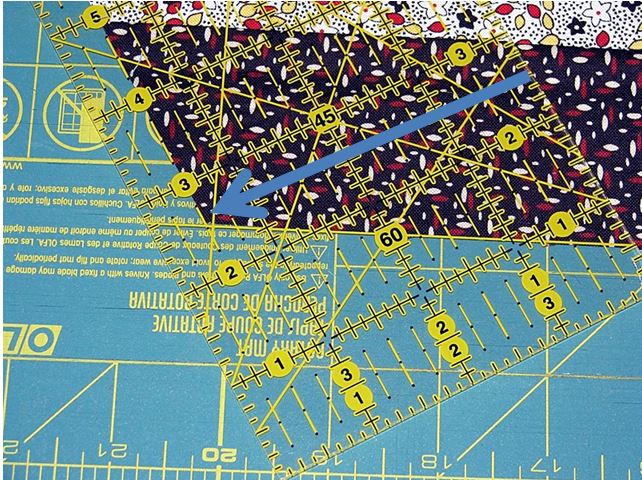 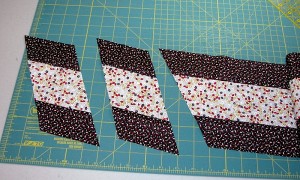 Using the medium strip set, make your first cut using the 60 degree mark on your ruler but the ruler should lean to the right, opposite of the way you cut the light strip. 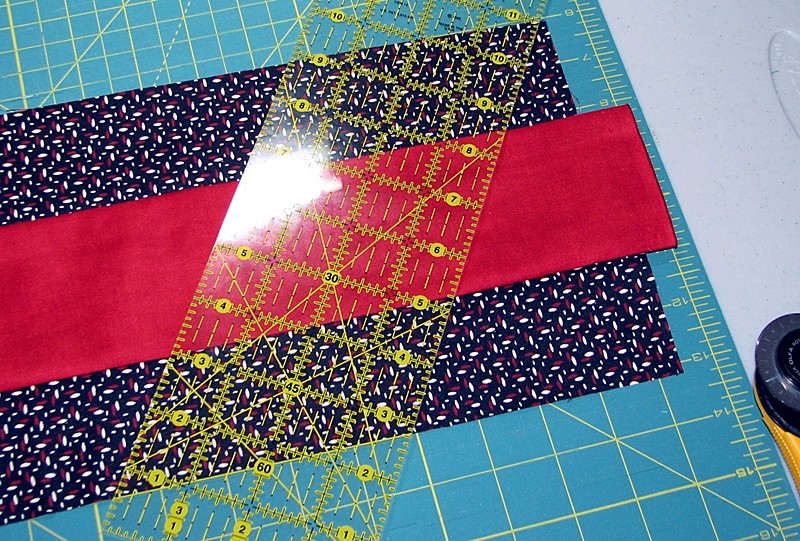 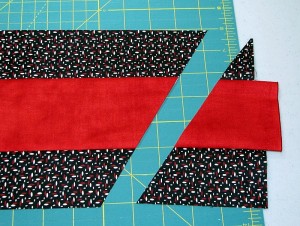 Flip your strip so that the cut edge is on the left then begin cutting 3 1/2″ strips like you did on the light strip set only in the opposite direction. 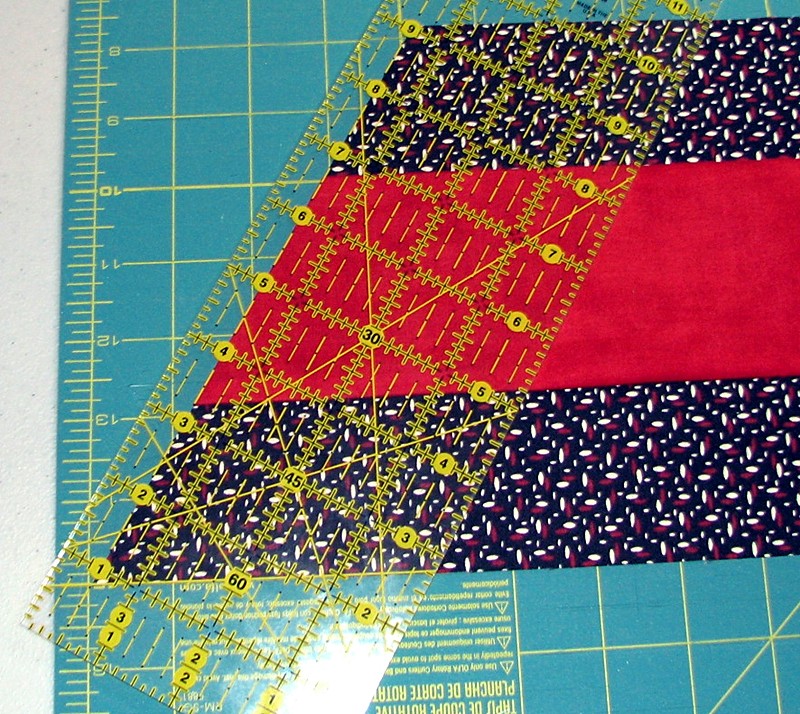 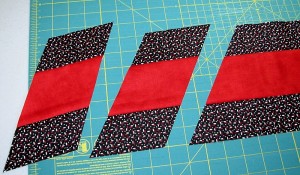 Take the medium and light 3 1/2 inch blocks and lay them out horizontally on your cutting board.  We are now going to cut off the ends to make them into rectangles. 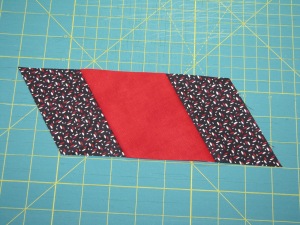 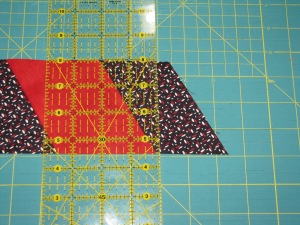 We will cut off each end at a 90 degree angle leaving 1/8 of an inch from the edge closest to the center strip.  I found that I had a mark on my ruler that was 1/8 inch long (at the half inch point in the center of my one inch sections) and just touched it to the edge of my center strip for a nice cut, like so: 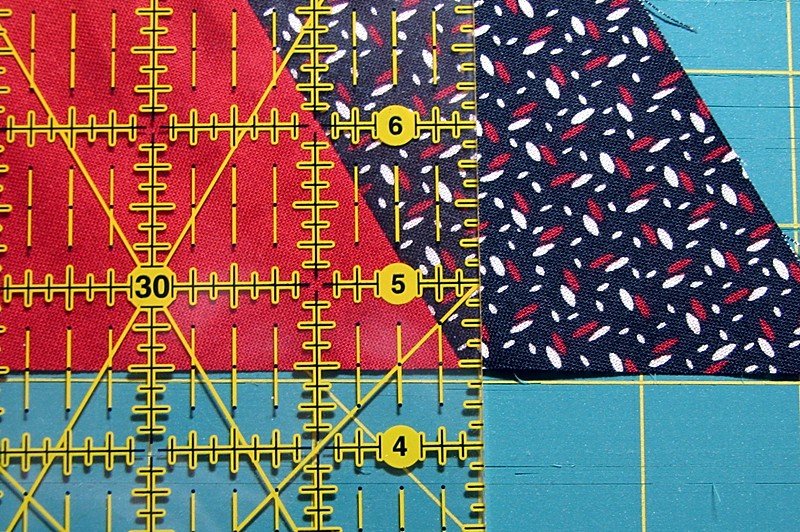 Cut off one end, flip the strip, then cut off the other end.  Do this on the light and medium blocks.  Your rectangles will equal about 3 1/2 inches by 5 1/2 inches. 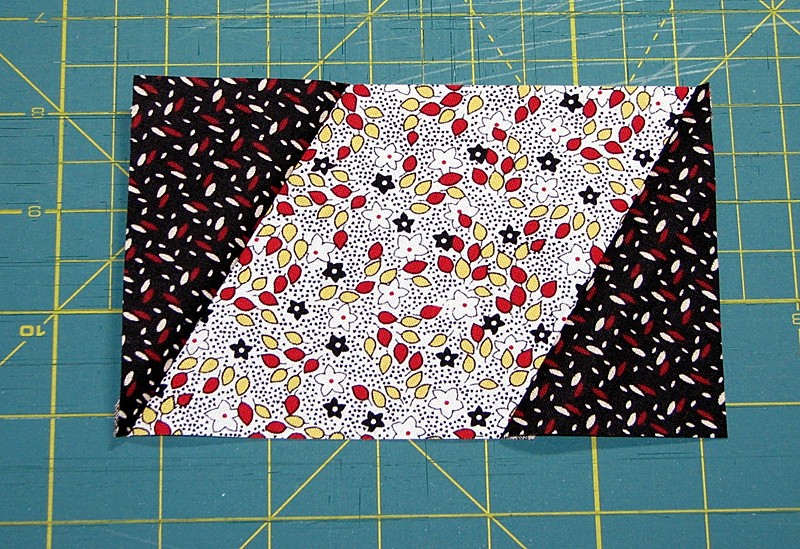 Lay a light set and a medium set together to make a V shape. 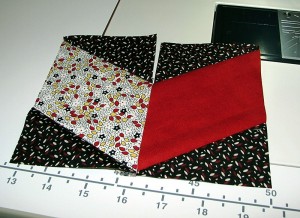 Place them right sides together and line up your points by nesting your seams.  Since you pressed them in opposite directions when making the strips, the seams should bump up together nicely.  Sew them together using a 1/4″ seam allowance. 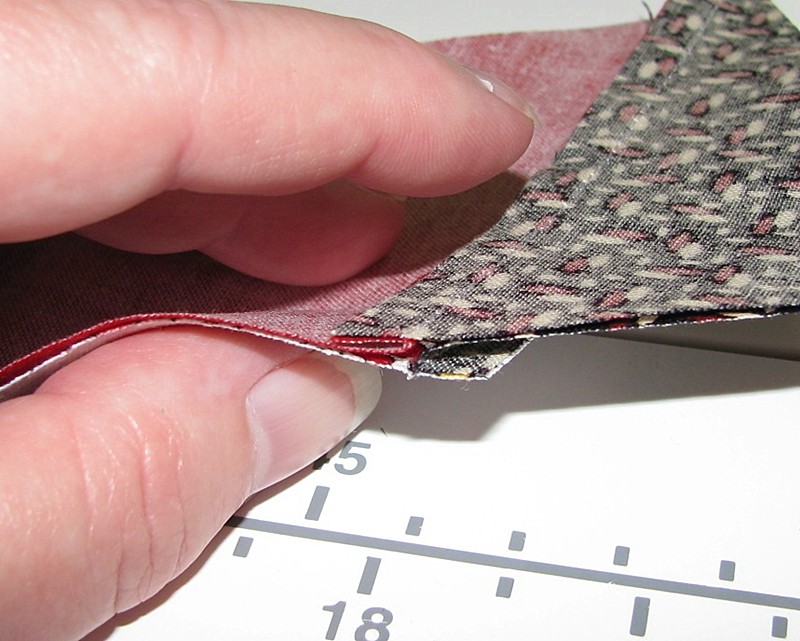 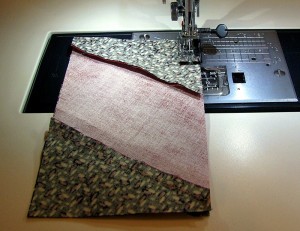 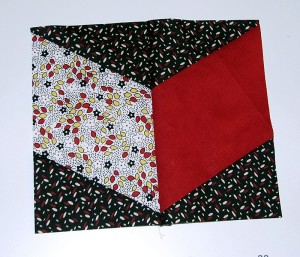 Press your sewn seam towards the medium fabric.  Sew the rest of your rectangles into pairs to make more blocks.  Then sew your blocks together in horizontal rows the width that you desire, making sure that you keep the blocks all going in the same direction. 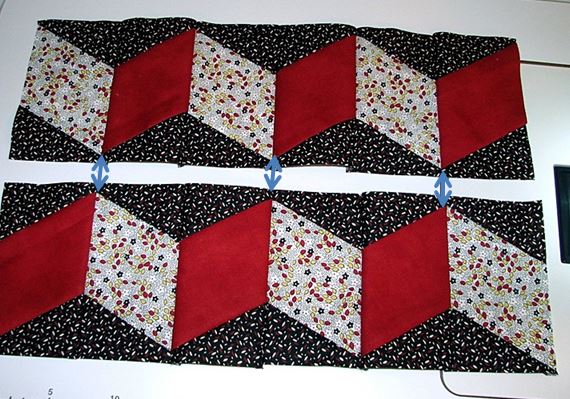 Here’s the basic result.  I ended up adding some more rows/blocks to the ends to make it bigger, but you get the picture! 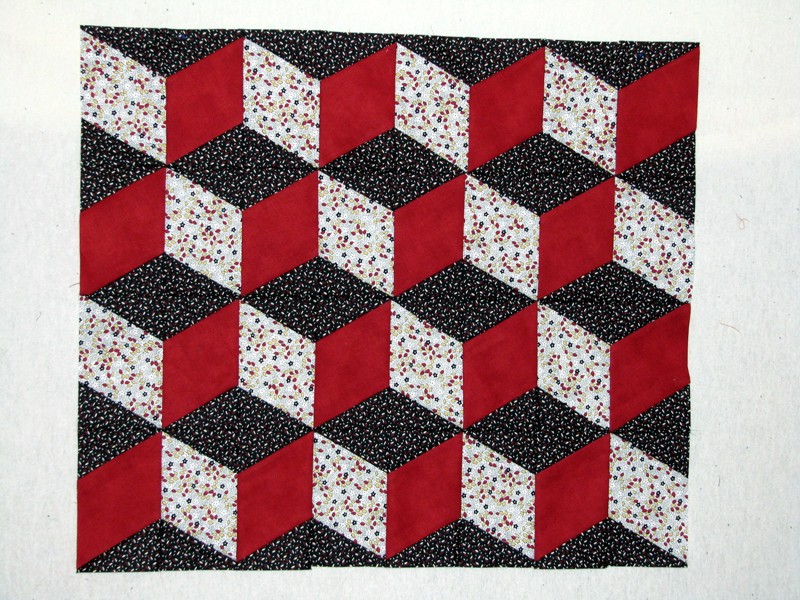 I hope my sewing and cutting tips help if you decide to try out this technique.