I don’t know why I have these unexpected, sudden moments of clarity, but once again, I realized there was another way to make my “accidental” quilt block.  I’m going to need to find another name for it eventually!

While playing with ideas for another round of borders on my Laurel Burch quilt, I had cut some small squares and made some half square triangles.  As they were laying on my cutting table suddenly I saw it; another way to make that block!

From looking at this: 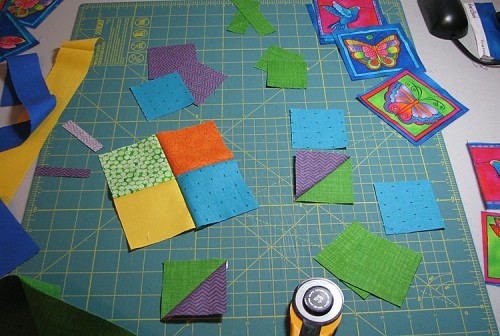 To laying out this:

Now I had “discovered” three different ways to make this block:

So this got me thinking.  If I was better at geometry, or knew a little something about engineering, would I have been more prone to have figured this out sooner rather than by accident as I was experimenting?  That said, if I was just a more experienced quilter would I have known this as well, LOL.

There was actually a time in my life where I would have been mad at myself about this.  My internal dialogue would have been “How dumb of me to think I discovered a way to make a unique block” (when I was playing with the sub-cutting of a nine patch).  I would have felt foolish.  But for some reason, maybe because I’m more “mature”, I just felt like this was a new lesson learned and still enjoyed the process of experimenting without trying to adhere to specific standards.  However, for me, this third technique is really easier than trying to design a color layout for the nine patch that will give me the right result after cutting it up then sewing the pieces together.

I also like these different quilt layouts that you can achieve with this type of block:

In this one the red and green cross really stands out to me. 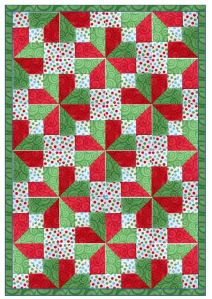 I like the zig zag pattern (of the burgundy red and green) of this example and the fact that the center square is smaller in each block due to the additional seam when sewing two halves of different cut blocks together (see this post):

The third one has the same layout as the first, but because of the colors used the purple points around a blue center square (almost like a flower) stands out to me: 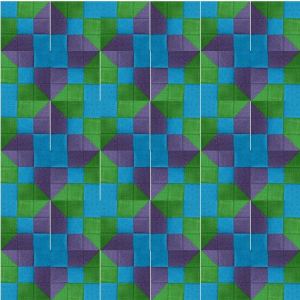 So my quilting education continues!  Whether I try to think like an engineer, mathematician, or blindly go my own way, I’ll just enjoy the process!

FOOTNOTE:  No sooner had I pushed the button to publish this post I realized there is a fourth way to make this block (maybe you have too)!  Rather than add it here, I’m going to make a quilt using that technique then publish a tutorial.  Stay tuned…

3 thoughts on “Engineer, mathematician, or free spirit – which path do you take when designing quilts?”

Quilting Resources I Use

Follow Beyond Sock Monkeys ~ My Quilting Adventures on WordPress.com